Tyburn and all London's Martyrs of Christian Disunity 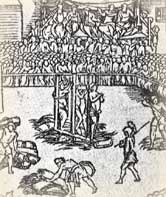 On Saturday 27 May 2006, an Ecumenical Commemoration of all London's martyrs from the Church's divisions, Catholic and Reformation, took place at Tyburn Convent not far from Marble Arch in London.

Tyburn Convent is the national shrine to commemorate the Roman Catholic martyrs who lost their lives for their faith in the 16th and 17th centuries. It is situated on Hyde Park Place, a few hundred yards from the junction of Edgware Road and Bayswater Road, which was a principal place of execution for Middlesex, especially of those who had been held at Newgate Prison.

In a generous move, the community of Benedictine nuns who maintain a vigil at the shrine daily invited fellow Christians of all traditions to join with them in recalling the fortitude and life's offering of the Cathoilc martyrs. as they likewise commemorated the Anglicans, Reformers and other Protestants who had died for the sake of their beliefs in Christ during the same troubled period of the Christian Church's in English history. 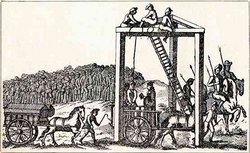 The service took place in Ascensiontide, a traditional season of praying for unity. Its aim was the purification and healing of memory held in each of the Church traditions represented, to thank God for the faithfulness of Christians in the past, to praise God for uniting all those who had gone to a martyr's death with the Passion of his own Son, and to pray that in the power of the Cross of Christ, their witness and devotion wholly to Christ will bear witness in the visible unity of Christians.