The Martyrs of Gloucester


On 4 May 2007, the Feast of the English Martyrs, the Rt Revd Declan Lang, Roman Catholic Bishop of Clifton, unveiled two plaques outside St Peter's Church in the heart of Gloucester - one to mark the historic foundation of the Roman Catholic chapel, the other to commemorate the martyrs.

The city's Civic Trust had worked with the City Council to ensure that the historic nature of the location, as the site of the first post-Reformation Catholic Church and school in Gloucester, was commemorated alongside the seven Catholics with Gloucester connections who were martyred for their faith between 1585 and 1601. They include Blessed John Sandys, priest, Stephen Rownsham, priest, and William Lampley,  a glover, convicted of high treason for converting his relatives; and Thomas Alfield and Thomas Webley, who were hanged drawn and quartered at Tyburn for being priests.

﻿
Present at the unveiling was the Mayor of Gloucester, Councillor Sue Blakeley, as well as the Anglican Bishop of Gloucester, Right Reverend Michael Perham. In the reign of Queen Mary, John Hooper, a former Cistercian monk and a leading Reformer bishop of Gloucester had been executed for proclaiming his Protestant faith.

The current Parish Priest and Dean of Gloucester Father Bernard Massey said, “It is important that in a secular world, the courage and sacrifice by people of faith is an important witness to the world of today.”

On February 9th 2005, the Anglican Cathedral community in Gloucester had also commemorated the 450th Anniversary of Bishop Hooper's death by burning on conviction for heresy under the Catholic Queen Mary. This was followed by a series of Lent lectures, "Reformation and Reconciliation". The following year, in February 2006, members of the Cathedral congregation made a pilgrimage to Rome.

Here is the address by Mr Ian Hollingsbee of the Gloucester Civic Trust at the installation of the plaques: 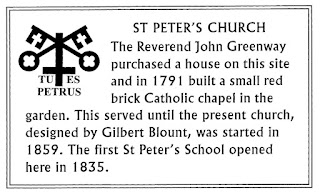 As a member of the Civic Trust council of management I was asked to liaise between the church authorities and the GHB committee and to this end I approached Canon Michael Fitzpatrick to suggest the erection of the two plaques. Each plaque was to have no more than 50 words and the wording itself was to be undertaken by the parish.

Canon Michael was pleased to accept the scheme subject to the Churches approval and he commissioned a local priest to undertake the difficult task of producing the content within the 50 word specification. Agreement was made as to the location of the two plaques and the decision to produce them in olive green so as not to clash with the stonework of St Peters church. 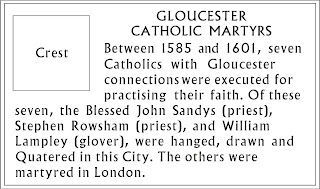 In June 2006 the wording was approved and quotations obtained for the plaques. The cost of each plaque, being just under £400 pounds, is to be funded from the GHB budget. With the transfer of Canon Michael, his replacement, Fr Massey, was informed of developments relating to the two plaques and added his support to the venture. I can confirm that at the time of writing the two plaques have been obtained and we must now fix a date with the Mayor and Bishop Declan for their public unveiling in 2007. Two possible dates would be the feast of the English Martyrs on 4th May or the Beatified Martyrs of the Clifton Dioceses on 14th November. The event whenever will be publicized and an article is to be prepared by the Civic Trust for the local ‘Citizen’ newspaper on the Gloucester Catholic Martyrs.