The Oxford Martyrs of Christian Disunity


In October 2003, at a meeting of Churches Together in Oxfordshire, HM Lord Lieutenant suggested a new memorial might be built in Oxford to honour all its local martyrs, irrespective of whether they were Protestant or Catholic. Already, beside St Mary Magdalen's Church in St Giles' there is an imposing memorial to the three famous Protestant Reformers; in addition a cross in the middle of
Broad Street marks the place where they were burned to death and a plaque on the wall nearby records the events.

The Protestant Reformers who lost their lives at the stake on October 16 1555 were Bishop Hugh Latimer of Worcester and Bishop Nicholas Ridley of London. They had both previously been bishops of Rochester, and thus both were successors of St John Fisher, a Catholic and also a martyr at the confused and dangerous time of reform and Christian disunity in the mid sixteenth century. On March 21 1556 they were followed by the great Archbishop Thomas Cranmer of Canterbury, also burned on a conviction for heresy under Queen Mary.
﻿﻿
The Catholics who died on 5 July 1580 were George Nichols and Richard Yaxley, hanged drawn and quartered for being priests, and Thomas Belson and Humphrey Prichard, laymen hanged for the felony of harbouring the priests. All four were beatified by Pope John Paul II in 1987. On the 9th October 1610 George Napper was also hanged drawn and quartered for being a priest.

On March 21 2006, the Prayer Book Society, an Anglican association which seeks to preserve and promote the Book of Common Prayer, the standard of Anglican worship and spirituality first devised by Archbishop Cranmer, held a service 450 years to the day after his death in Broad Street. Graciously, Catholic representatives were invited to the occasion.

An initiative by Professor Diarmaid MacCulloch led to a common memorial of all who died as victims of the consequences of disunity among Christians, great prelates, simple country priests, dons and ordinary working lay people, Protestants and Catholics, some of them unknown. This was placed in the University Church of St Mary the Virgin and unveiled and dedicated on 19th June 2008. 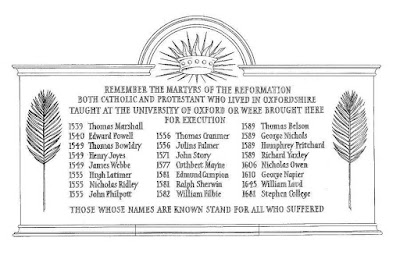 Here is an article from BBC History for April 2006 by Professor MacCulloch, looking forward to the common memorial of the Oxford Martyrs: History against Hatred.

A memorial to the Catholic martyrs in the form of a plaque, corresponding to the Protestant Martyrs' Memorial and the cross in the roadway in Broad Street,  has been placed on a house in Holywell Street owned by Merton College. This lies close to the spot where the four martyrs of 1580 were hanged - George Nichols, Richard Yaxley, Thomas Elison and Humphrey Pritchard. Now all the memorials commemorate not different sides but memories reconciled and the healing of Christians' disunity. 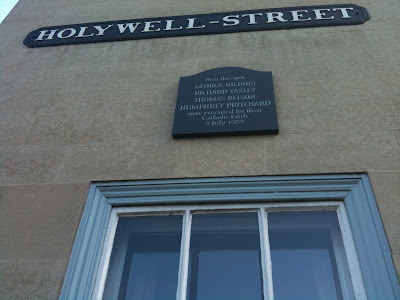